Intel recently refreshed its low-power processor lineup with the Raptor Lake U and P-series 13.th Gen Core Mobile SKU. Supporting various TDPs up to 28W, these SKUs will allow the Ultra Compact Form Factor (UCFF) PC maker to refresh his legacy NUC clones. Starting with Tiger Lake, ASRock Industrial took over his ASRock’s Beebox chassis design and outfitted it with a 4″ x 4″ industrial PC motherboard inside. The company usually announces these his NUC clones within days of Intel’s platform announcements and this time around Raptor Lake is no different.

One of the key updates this time around is the branching out of the NUC BOX lineup into slim and high-rise versions. The legacy NUC 1300 BOX series retains its previous industrial design supporting 2.5-inch SATA drives. Eliminates the new NUC 1300 BOX series 2.5” drive support and reduces system height from 47.85mm to 38mm. The company currently limits processor choices to Core i7-1360P or Core i5-1340P. There are a total of 6 different models on the market and the main differences are summarized in the table below. Dual LAN function is only available on high-rise version.


The NUC BOX’s M.2 2280 support is enabled with a separate bracket, but the screw base is already in place on the NUC BOX.

Similar to the NUC 1100 and NUC 1200 BOX series units, one of the front panel Type-C ports is advertised as USB4 but has Thunderbolt 4 capabilities. ASRock Industrial seems to keep the same components as his NUC 1200 BOX series for the NUC(S) BOX 1300/D4 series. So the port is USB4 and has 40Gbps capability along with DP 1.4a Alt mode, but it’s not. There’s his newly touted 20G (USB 3.2 Gen 2×2) support that Intel has promised for his Thunderbolt port on the low-power Raptor Lake mobile platform. One of the requirements for this support seems to be the new Hayden Bridge retimer which is not used on the NUC(S) 1300 BOX/D4 series. 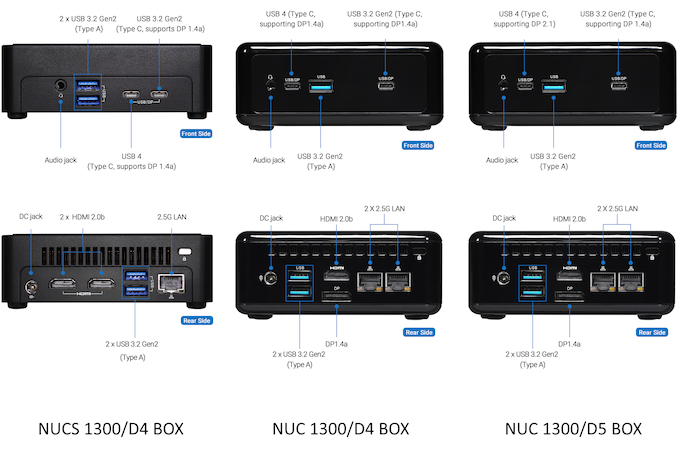 However, the DDR5 capable D5 version appears to use a different configuration and can claim DP 2.1 from the USB4 port. We reached out to ASRock Industrial to see if this would also enable support for 20G USB 3.2 Gen 2×2.

In terms of availability and pricing, the company plans to release the DDR4 version first. The NUC 1300/D4 BOX series will be shipping early next month, while the NUC 1300/D4 series with SATA support is expected to ship mid-February. Market prices for barebones 1360P versions (without SODIMMs and disk drives) of both systems are expected to be around $700.

Neil Druckmann on Last of Us Part 3 Possibility: 'I Think There's More Story to Tell'